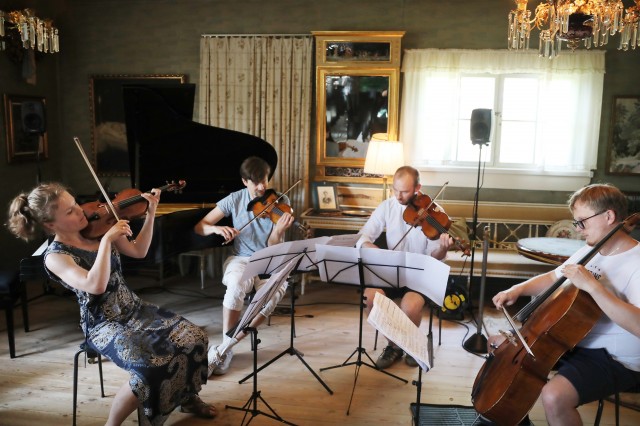 Kamus Quartet holding a dress rehearsal in Ainola at Our Festival 2018. Picture: Maarit Kytöharju / Our Festival

“Kamus is a perfectly blended group, and the brilliance of each individual shines through”

Founded in 2002, Kamus is one of the most prominent Nordic ensembles and continues to delight audiences with a strong and distinctive voice. In 2017 the quartet launched a new CD and toured around the world including to Mexico, UK, Belgium, Sweden and the Netherlands, including their celebrated Concertgebouw debut in Amsterdam. The new CD, which includes the world premiere recording of Esa-Pekka Salonen’s string quartet Homunculus won the EMMA-prize for the best classical music record in Finland 2018. It followed the acclaimed album Different Voices featuring Sibelius’s Voces Intimae, which was awarded the prize for best classical music album of 2016 by the Finnish National Broadcasting Company.

Kamus was appointed as the artistic director of Our Festival in 2018, opening their tenure in summer 2019. An active force in Finnish musical life, Kamus has developed new ways of presenting chamber music with its acclaimed concert series TeemaHelsinki. They have also launched a project that aims to enrich the musical life of rural parts of Finland. In fall 2017 Kamus curated on of Our Festival’s Breaking the Silence -tours.
Founded in Helsinki in 2002, the quartet studied at the Sibelius Academy, the European Chamber Music Academy (ECMA) and the Britten Pears Academy in Aldeburgh, UK. This prestigious training, along with support from a number of distinguished artists, has helped Kamus to find its own personal style and voice. Significant elements of this included the studies at ECMA, which concentrated on musical rhetoric and the performance practice of the classical era, knowledge of musical language and a deep insight into the structure of the score and which opened up new perspectives, and continues to do so. Aldeburgh Music’s Hugh Maguire, a student of George Enescu in the early 20th century, introduced the quartet to the old European string music tradition, and his innate and warm-hearted musicianship left a distinctive imprint on the style of the quartet which can undoubtedly still be heard.
Kamus Quartet:
Terhi Paldanius, violin
Jukka Untamala, violin
Jussi Tuhkanen, viola
Petja Kainulainen, violoncello
Ylös